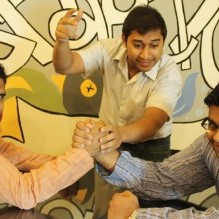 We are very happy to introduce to you three talented people who have recently joined us: Zeeshan Ahmed, Ahad Khan and Shehzad Bilal.

(right to left on the picture)

Before joining us as an Android developer he worked as a freelancer. Came all the way from Faisalabad to join us in Karachi.

Ahad enjoys playing badminton and hacking hardware. From a young age, his friends recognized him as an engineer because of his technical and logical mind. He’s a quick learner and a talented PHP Developer. He worked at a couple of software houses before joining Grappetite.

Loves playing cricket and used to be the captain of his team. His hidden talent is he knows quite a bit of electrical work and if it were not for programming he would have been a banker. Shehzad has worked as a software developer for other companies and we are pleased that he has now joined us as an iOS and web developer.