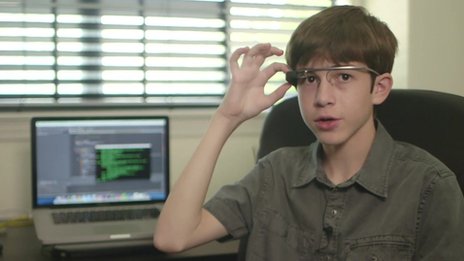 Is this a future billionaire?

At 15 Thomas creates and sells apps for smartphones and Google glass. And he has big plans for his summer. He wants to revolutionize 3D printing technology by making it 10 times faster and more liable than the current generation 3D printers.

Thomas Suarez is anything but typical. He set up his first company CarrotCorp when he was just 11 years old, making his first apps, and at 15, he is a seasoned businessman. The teenager tinkers with 3D printing technology when he’s not in school or codes new apps for smartphones or Google Glass (which he wears all the time outside of school).

Thomas also does product and technology reviews for the Tribeca Film Festival and is already a popular speaker at technology conferences. But isn’t running a company as well too much pressure for a teenager? “There’s something that makes me want to keep going and keep innovating,” he says, laughing at being asked if he’d be better off outside climbing trees or riding a bike. “I feel that my interests will always lie in technology. Maybe I should go outside more but I just really like this stuff.”

Thomas is completely self-taught when it comes to coding and business, although he gets help from his parents on the business end. He thinks it’s a mistake that his school in Manhattan Beach and other California public schools do not offer more technical courses. “A lot of kids my age want to learn, but there’s no place to go because the schools aren’t teaching programming,” Thomas says. “It’s really frustrating actually. It was really frustrating for me and it still kind of is that we don’t have any programming classes or any real tech classes at my school. “It’s something I really believe we should have.”

To fill the void, he started an app club with some like-minded friends so they can help each other create games and new apps.