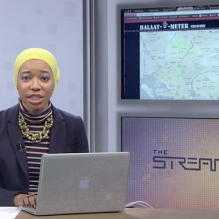 Halaat-O-Meter is the crowd sourced platform we recently launched to enable residents to posts update on their neighbourhood during times of trouble. The initial response of, especially, the people of Karachi was overwhelming and today we found that Halaat-o-meter is even featured at Al Jazeera. Anyone can report the current situation in his neighborhood (we call this the ‘halaat’, in Pakistan) on a real time map.

It is actually very sad that Halaat-O-Meter seems to fulfill a need of the people of Karachi. Last weekend over 80 people died in the city of Quetta when the Shia Hazara community, a minority in Pakistan, was attacked. As a result of protesters hit the streets of all major towns and cities of Pakistani, causing unrest that made people use Halaat-O-Meter.

Many minority groups in Pakistan, including Hindus, Christians, different Muslim minorities  have been under attack for years the sectarian violence in Karachi has claimed over 2200 lives last year only.